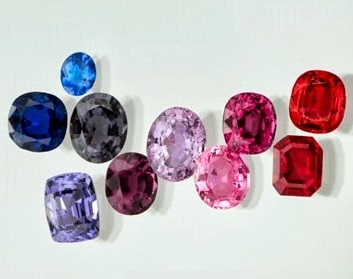 Blue crystals are associated with calm, internal strength and peace. Because of its dazzling color this stone is often mistaken for sapphires. The blue color occurs due to the presence of iron and cobalt. Its dazzling beauty is pleasing to the eyes.

Blue spinels are known for activating the third chakra, also known as the Solar Plexus chakra, which is located below the lower ribs. This chakra controls our self esteem and stress issues. A balanced Solar Plexus chakra will cultivate feelings of happiness and make you confident in every walk of life. If your Solar Plexus chakra is blocked, the blockages will appear in the form of back and stomach problems.

This stone is also considered a powerful spiritual stone. It opens your eyes to the mysteries of the universe and enables you to connect with the higher being. A balanced Solar Plexus chakra will also help you in staying calm, dealing with anxiety, and develops curiosity, and photographic memory.

Green spinel is associated with communication skills. It stimulates the heart chakra that is located in the center of the sternum. It balances all other chakras of the body and stabilizes our emotions so we can create balanced relationships.

If the Heart chakra is out of balance it leads to difficult relationships, lack in self discipline and dependency issues. Green spinel balances the frequency of the nervous system and reduces heart, lung, and thymus gland problems.

This exquisite stone corresponds to overall chakras of the body and is often known as the ‘true’ spinel. Majority of the white spinels available in the market are synthetic. It induces energy in the body and makes people feel alive. The most famous white spinel recorded in the history is known as the Great White Spinel of Kandy. It weighs approximately 71.25 carats. In 1803 it was presented to a Major in the Sri Lankan army by the King of Kandy, Boldoc Swamie. It was set in gold and surrounded by rubies.

Later, the Major was court marshaled due to his bad behavior and suffered financial crisis. This is when he sold the white spinel and it vanished from the scene. In the 19th century, it reappeared for the auction in the French court. However, it was not sold in the court and it disappeared once again from the market. Currently this precious stone is estimated at $1,000,000.

This enchanting stone is related to the Sacral chakra, which is considered the seat of emotions. It stores all the experiences connected to hate and love, the feelings of rejection and acceptance, and helps people in dealing with them. It opens us to our emotions without being overly-dramatic or touchy. A balanced Sacral chakra creates feelings of internal happiness, enables you to let go of unhealthy relationships and helps you in dealing with addiction problems.

This chakra is located below the navel, in the lower abdomen and corresponds to the bladder, sexual organs, kidneys, hips, bodily fluids and lower back. A balanced Sacral chakra will cultivate passion, warmth, joy, love, innovation, expressiveness, and reduce your anger issues, depression and guilt.

Black spinel is the rarest type of spinels available in the market. This precious stone is associated with love and enables people to let go their pride and ego issues. The legend says that this stone has the power to increase its wearer life duration. It is also known as one of the most powerful protective stone that absorbs all the negative energies and protects its wearer from evil thoughts and spirits.

Brown spinal corresponds to the Earth Star chakra and it is located 12 inches below the feet. This chakra corresponds to the feelings of humility, removes fear and induces earthly qualities in people. Normally meditative exercises are known to balance earth chakra but the energy emitted from brown spinel is also helpful in clearing this chakra. The vibrating field of light emitting from the Earth Star chakra can help you in exploring your inner feelings and dealing with them accordingly.

Pink color appears due to the presence of chromium but unlike red spinels, pink ones contain small quantity of this mineral. Pink spinels are considered talisman of lovers. These stones have the power to revitalize love. They are especially beneficial for couples who face problems in their relationships and are looking for ways to rejuvenate love. This stone is also helpful for couples who are in a long distance relationship and can’t be physically together.

All spinels are known for enhancing the immunity system of the body, and treating physical problems related to teeth, spine and skin. They are also considered effective healing stones for cancer and weight issues.

The worth and value of this stone is incomparable to other gems!