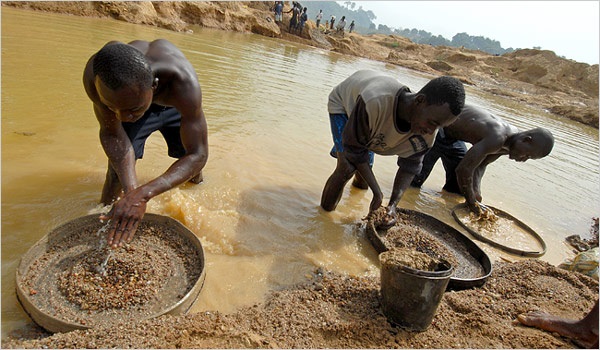 Today, diamonds are marketed as tokens of love and emotion. Thanks to the DeBeers slogan, “A Diamond Is Forever,” the link between everlasting loyalty and adoration have worked wonders on the human psyche.

Yet the diamond business generates billions of dollars annually as people around the world associate diamonds with wealth, power, and everlasting love. Few recognize that diamonds represent fear, death, and the struggle for survival.

Conflict diamonds are unidentified stones that originate in rebel-controlled areas of African states such as Sierra Leone, Angola, the Democratic Republic of Congo, Namibia, and Botswana. These diamonds are channeled through countries such as Liberia, Guinea, and the Ivory Coast before they reach European cutting and polishing houses.

The most pressing issue of conflict diamonds, often referred to as “Blood Diamonds,” is that their profits fund murderous guerrilla armies. These groups, such as Angola’s United for the National Independence of Angola and Sierra Leone’s Revolutionary United Front, buy guns and grenades that have killed more than 75,000 people during a nine-year civil war.

Being politically correct is never a good idea…

There are people who are not helping the situation of the Africans that are trying to modernize their countries. Some politically correct people, the “blood diamond Nazis”, are railing against the concept of anyone buying or owning a diamond because in their minds they see horrible atrocities every time that they look at any diamond, they see “blood diamonds”.

It has become their mission to spread the word by disseminating out dated facts that are not correct and it is these “facts” that do a lot of harm to the millions of people in these emerging countries. These “blood diamond Nazis” will not rest until everyone stops purchasing and wearing diamonds. They are ultimately hurting the Africans that they claim they are trying to help. I ran across one of these “enlightened do gooders” recently in a forum on Google.

There are some suppliers who are taking advantage of everyone’s disdain of the concept of blood diamonds. They do this by promoting the fact that it is their products which are the alternative to blood diamonds…. most notably the people who sell diamond simulants (Cubic Zirconia or Moissanite) or who sell “ethical diamonds” from regions other than Africa.

In addition, there are some organizations that still want to keep the idea of blood diamonds alive in people’s minds…. they do this mostly for fund raising purposes –

– “you can help put a stop to blood diamonds by sending in your donation now!”

– “Attention webmasters!… make a donation to our effort and you can put this “Stop Blood Diamonds!” logo on your website to show your visitors that you really care about the people of Sierra Leone!”)

When you go to these groups’ websites… their “up to date” reference material about blood diamonds is from 1998 to 2001 and some of the information even dates back to 1982.

It is unbelievable that some people are using images of Sierra Leone amputees to promote the buying of Canadian diamonds, or promote buying diamond simulants, or used for fund raising purposes. Anytime you see these images be aware that these people are trying to manipulate you at the same time that they are helping only themselves and not helping the people in the photos!

These people, the “not for profit” NGOs and the for profit companies, want to put forth the impression that there is currently a blood bath going on in parts of Africa and this situation can totally be blamed on conflict diamonds.

I have never seen a photo, or a video of, or heard a report about a piece of diamond rough picking up a rifle and killing someone. It was people with an agenda who did all of these horrible things to other people!

Where do we go from here?

Things change, people change, situations change…. to promote the idea that Blood Diamonds from Sierra Leone are still actively being put on the market hurts these people that have already gone through so much.