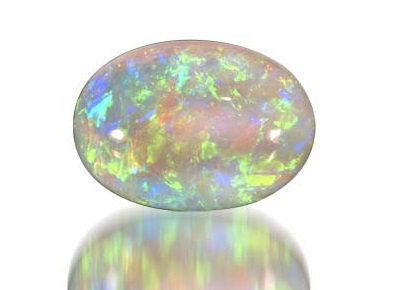 Mexico has a special place in the opal world. It produces both precious opal and common opal that is called “fire opal” because of its yellow to orange (aka arananjado opal) to red body color. Some specimens of fire opal can be faceted because of their high clarity, but most fire opal is somewhat cloudy. This cloudiness in precious opal, which comes from internal structures such as the balls that defract the light, is called opalescence. Some of the finest fire opal comes from Querétaro, Mexico.

So-called “fossil opal,” “fossilized opal,” or “opal in wood matrix” is created by pseudomorphic replacement, when the original carbon-based object (tree limb casts, pine cones, bark, animal material, etc.) decays and the void is replaced hydrated silica, creating a replica of the original wood structure. Notable sources for fossilized opal are Queensland, Australia and the Virgin Valley in Humboldt County, Nevada, which was created from 14-million-year-old petrified wood from the Luisian Stage (Miocene rocks found in the Pacific Coast region of North America).

The use of opal by humans dates back to the dawn of man. So-called Ethiopian “chocolate opal” was discovered by in a cave in Kenya by the famed archeologist and paleontologist Louis Leakey in 1939. Historically, opal was produce for hundreds of years at the Dubnik mines in Hungary, now present-day Slovakia and the Czech Republic.

The opal produced in Hungary was found in igneous rock, and had relatively little play of color by today’s standards. As Europeans began to explore the globe, opal from the “new world” became available. Places like Mexico, the United States (Nevada, Idaho and Oregon), Honduras and Brazil all produced beautiful precious opal, mostly volcanic in origin.

Fire opal mining in Mexico dates back several hundred years, and the main mining region is located near the town of Magdalena in Jalisco, Mexico, and later in the state of Querétaro. All of the original mining locations were lost during the Spanish Conquest, but in 1840, Sir José Maria Siurab rediscovered some of the original deposits at what is known as the Santa Maria Iris Opal Mine in Hacienda Esmeralda.

The nation of Ethiopia, in north-eastern Africa also produces some beautiful specimens of volcanic opal. The hydrophane variety known as “chocolate opal (aka “hydrophane fire opal”) is found at Yita Ridge, near Mezezo (the woredas, or district of Mafud Mezezo Mojana) in the Amhara Region of the Ethiopian highlands. The so-called “Wello Opal,” also known colloquially as “Crystal Fire Opal” is found to the north of Ethiopia’s capital, Addis Ababa, in the province of Wollo.

Opal Mining in the Australian Outback

Australia is truly the “land of opal,” with over 90% of the world’s gem-quality opal coming from Australia’s NSW, South Australia, and Queensland territories. Opal was first discovered in Australia by George Cragg in 1888, in present-day Opalton, Queensland.

As the sea retreated, conditions were right for ground waters saturated in silica to replace other minerals, make fossils, and permeate the rock to form thin seams and nodules of precious opal, alone with a vast amount of potch. After the formation of the opal, a long period of desiccation occurred that helped make Australian opal probably the most stable in the world.

Opal mining in the outback regions of White Cliffs and Coober Pedy is a chaotic and disorganized affair. With no centralized oversight, miners spread out across the plain, digging holes at random, leaving behind a strange landscape of mounds resembling the surface of the moon (above, left).

The satellite view of White Cliffs in NSW Australia tells the whole story. Freelance miners and tourists can “noodle” (aka “fossick,” “fossicking” or “prospecting”) for opals without a permit, but a permit is required for organized (mechanized) mining. Up to 90 percent of the opal found in these inhospitable regions is valueless material known as “potch.” 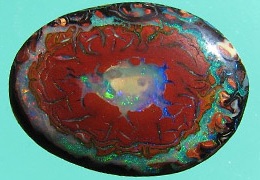 Opal that is mined from Australia’s Andamooka mine is considered to be some of the most durable and stable opal due to its low water content. Fire opal is found in Central America, South America and the United States (Idaho and Oregon), typically within cavities formed in volcanic lava flows.

Precious opal is divided into numerous sub-groups depending on its body color, incorporating matrix, size/shape of the areas of color. Thin pieces of precious opal can also be attached to, laminated to, or backed by foreign material forming an opal “doublet,” or glued between a clear glass cap and a foreign backing (potch, glass or ironstone) to form a “triplet.”

These are sometimes referred to as “assembled opals.” Both of these last constructions can produce attractive durable gems, but are much less desirable than gems made from solid opal. Opal is typically cut into a cabochon, although highly transparent fire opals can be faceted. 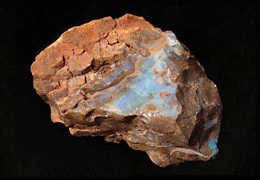 Opal is a very fragile and brittle material when compared to other gemstones, and can easily chip, crack or fracture when exposed to shock. Due to its lack of durability, opal is occasionally treated or impregnated with mineral oil, glycerin, plastic, or wax which acts as a bonding agent. The only downside of these treatments is that they can yellow over time, diminishing the stone’s play of color.

Black opal, or white hydrophane opal is occasionally treated with chemicals, smoke (carbon), or dye. Opal crazing can also be stabilized using a bonding agent such as Opticon epoxy resin which has a high refractive index.

Being a hydrated stone of variable composition, opal can have a high water content, and this can lead to breakage from sudden changes in temperature (thermal shock), and potential problems when cleaning the stone with steam or ultrasonic cleaners. Long term storage of opal is more secure if the gems are kept in a sealed bag with a damp piece of cotton to prevent dehydration. Even with precautions, some precious opal is not stable and will crack and “craze” in time. The market tends to discount even beautiful opal from a location with a poor record of stability.

There is a newer jewelry-grade opal simulant that is actually a polymer-impregnated manufactured opal. This simulated opal material has an opal-like silica lattice impregnated with plastic to bond the material together. Lab-created opals are manufactured and/or distributed by Created Opal Co. in NM, ICE Industries in Downey CA, and Morion Company in Brighton MA.